The famous clock Big Ben stands near the Houses of Parliament. Big Ben is a big bell. The clock has four faces and five big bells. The biggest bell is known as Big Ben. The bell is named after Sir Benjamin Hall; the first commissioner of works when the Houses of Parliament were rebuilt in 1850. He was a tall man, whose nickname was Big Ben. So people know the clock as Big Ben. You hear it every hour. The bell weighs 13720 kilograms. It has a deep tone and you can hear it on the radio: “This is the BBC. The time is six o’clock.” And then you hear the deep boom of Big Ben of six times.

Big Ben looks most attractively at night when the clock faces are illuminated. You even know when parliament is in session, because a light shines above the clock face.

Buckingham Palace is the Queen’s official residence and is used to receive and entertain guests on state, ceremonial and official occasions for the Royal Family. The Queen has four palaces in Britain.

The Buckingham Palace is located between the Green Park, Hide Park and St. James’s Park. During August and September you can go inside Buckingham Palace. The palace is very big. You can see 19 of the rooms, ballroom and gardens, the gallery with the Royal family’s greatest treasures including paintings and the finest French and English furniture. If the Queen’s flag is flying outside the palace, it means that the Queen is at home. 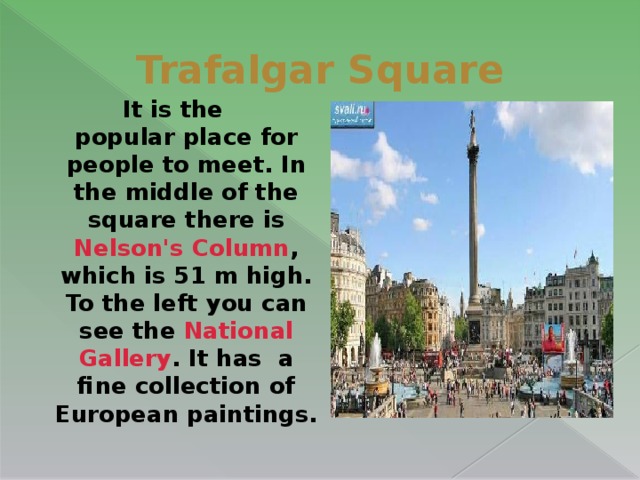 10 Downing Street is the residence and office of the Prime Minister of the United Kingdom and the headquarters of Her Majesty’s Government. Downing Street is located in Whitehall in central London, a few minutes’ walk from the Houses of Parliament and a little farther from Buckingham Palace. It is actually the official residence of the first Lord of the Treasury, but in modern times this post has always been held simultaneously with the office of Prime Minister. 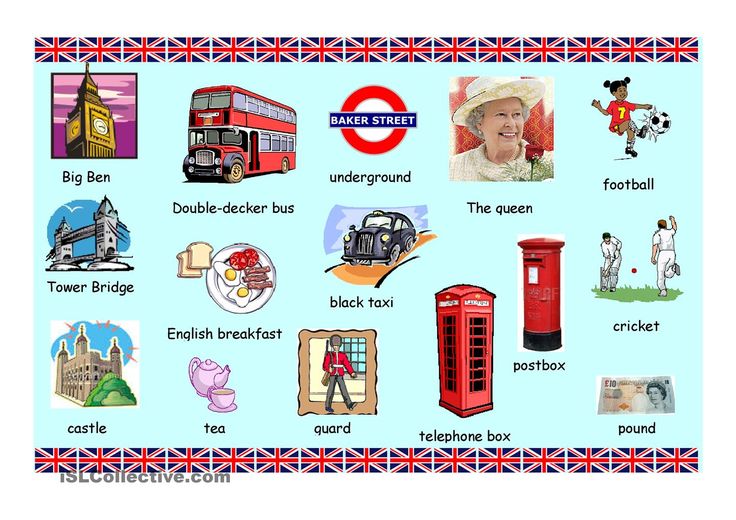 Trafalgar Square is the geographical centre of London. It was so named to commemorate Admiral Nelson’s victory at the Battle of Trafalgar. In the middle of the square there is a very famous monument Nelson’s Column with the statue of Lord Horatio Nelson on the top. The Column is over 170 feet high. Its pedestal is decorated with bas-reliefs of famous naval battles. At the base of Nelson’s Column are four great lions.

Trafalgar Square has become famous as a point for all kinds of demonstrations, marches and political meetings.

Each year in December, the people of Norway send a gift of an enormous Christmas tree to Britain which is erected in Trafalgar Square. This is thanks for Britain’s part in liberation during the Second World War. The London Eye is a giant observation wheel situated on the bank of the river Thames. It is 135 meters high. As the wheel turn it stops to allow tourists to see fantastic views over the city. It takes half an hour for the London Eye to complete one rotation.

Since opening in March 2000 the London Eye has become a symbol of modern Britain. The London Eye is visited by over 3,5 million people a year.

The wheel carries 32 sealed and air-conditioned egg-shaped passenger capsules. Each 10 tones capsule holds 25 people, who are free to walk around inside the capsule, though seating is provided. 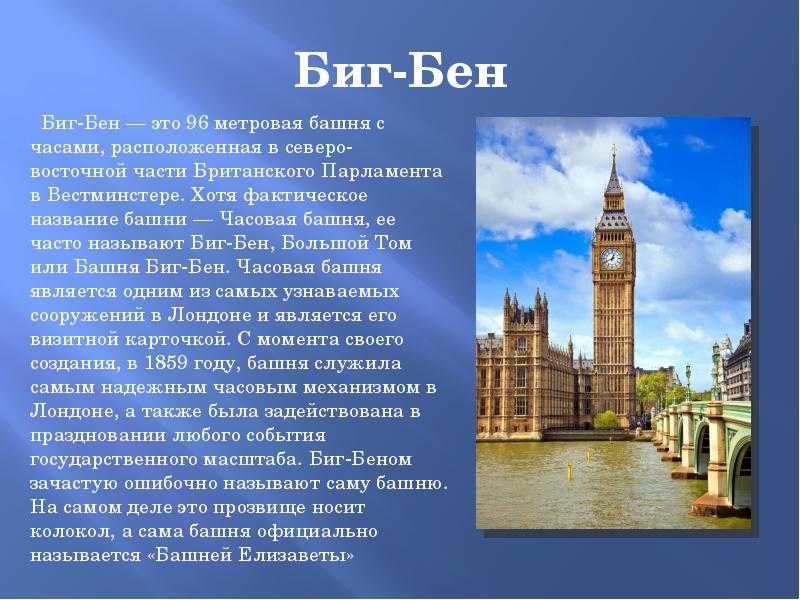 Tower Bridge is the most famous bridge over the River Thames. It is close to the Tower of London, which gives it its name. Sir John Wolfe Barry designed it.

The bridge consists of two towers which are tied together. The bridge was officially opened on 30 June 1894 by the Prince of Wales (the future King Edward VII), and his wife. 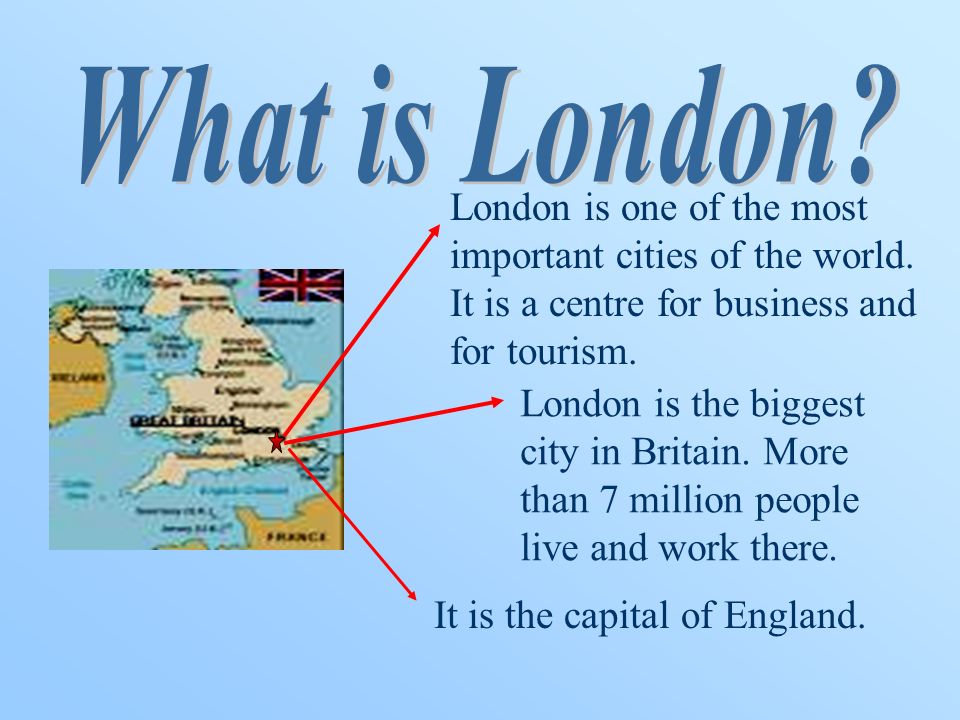 Tower of London. The White Tower.

The Tower of London is one of the most imposing and popular of London’s historical sites. Now it is a museum. It comprises 20 towers. The oldest is the White Tower, dates back to the 11th century and the time of William the Conqueror. Nowadays a lot of tourists visit the Tower of London, because of the Tower’s evil reputation as a prison. The Tower has got Beefeaters, ravens, the Crown Jewels. The royal Crown has got three hundred jewels on it and the celebrated Indian diamond.

Many stories associated with British history come from the Tower in 1483 King Edward IV’s two sons were murdered in the so-called Bloody Tower. Over two centuries later the skeletons of two little boys were found buried beneath steps in the White Tower.

The ravens, huge black birds, are an official part of the Tower. Legend states that it the ravens were to leave the Tower the Crown will fall and Britain with it. 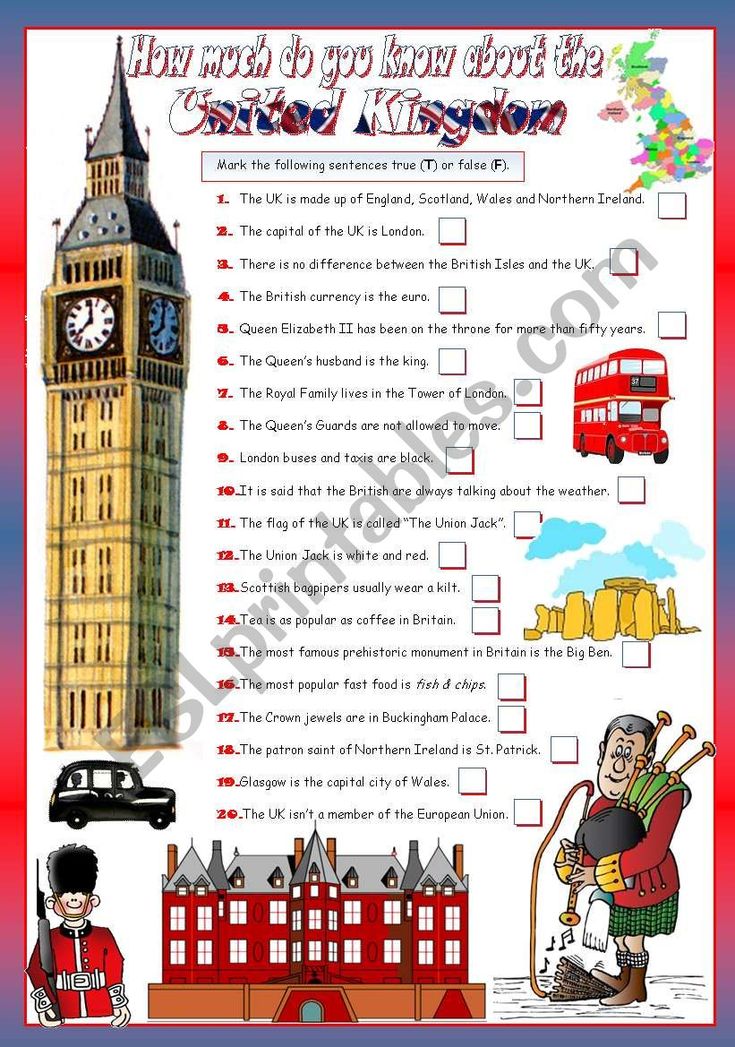 Under the special care of the Raven Master, the ravens eat raw meat every day. And there is no danger of them flying away, because their wings are clipped.

The Palace of Westminster also known as the Houses of Parliament is the seat of Britain’s two parliamentary houses, the House of Lords and the House of Commons.

In the middle of the 11th century, King Edward the Confessor had moved his court to the Palace of Westminster, situated on a central site near the river Thames.

In 1265 a parliament was created with two houses: the Lords and the Commons. The tower opposite Big Ben is the Victoria Tower, built in 1860. The tower contains the records of both the House of Lords and the House of Commons since 1497. During the parliamentary year the Union flag is hoisted on top of the 98m tall tower.

The Queen, who is the Head of State, opens and closes Parliament. All new laws are discussed by MPs in the Commons, then debated in the Lords, and finally signed by the Queen. All three are part of Parliament in Britain. Westminster Bridge is a road and foot traffic bridge over the River Thames. For over 500 years, the nearest bridge to London Bridge was at Kingston. Proposals for a bridge at Westminster had been made as early as 1664. The current bridge was designed by Thomas Page and opened in 1862. The bridge is painted green, the same colour as the leather seats in the House of Commons which is on the side of the Palace of Westminster nearest the bridge. This is in contrast to Lambeth Bridge which is red, the same colour as the seats in the House of Lords and is on the opposite side of the Houses of Parliament.

It links the Palace of Westminster on the west side of the river with Country Hall and the London Eye on the east and was the finishing point during the early years of the London Marathon. The Globe Theatre has long been associated with Williams Shakespeare. The original Globe Theatre, built by an acting company to which William Shakespeare belonged, opened in 1559.

Unfortunately, the original Globe Theatre burnt to the ground during a performance of Shakespeare’s Henry VIII in 1613. The new Globe Theatre opened in 1997. It is located on Bankside, about 183 metres from the original site. It was the first building with a thatched roof allowed to be built in London since the great Fire of 1666.

Similar to the original, the stage of the new Globe Theatre extends into a large circular yard, which is surrounded by three tiers of very steep seating. The most expensive seats are covered. All others are exposed, which is why plays are held here only during the summer months. Additional standing room is available at a very low cost for those who don’t mind remaining erect during the production. 30 St. Mary Axe Building is a skyscraper in London’s main financial district, the City of London.

Originally known as the Swiss Re Building, it was later renamed to its street address 30 St. Mary Axe after Swiss Re sold the building in 2007. Even before its construction was complete Londoners nicknamed the building the “Gherkin” for its distinctive shape and it is still known by that name.

The skyscraper was built in 2004 after a modern glass and steel design by the architectural firm of Foster and Partners. With 41 floors, the tower is 180 metres (591 ft) tall. The cigar-shaped structure has a steel frame with circular floor plans and a glass façade with diamond-shaped panels.

The top of the tower, where visitors find an open hall covered by a glass conical dome is spectacular. From here you have great views over the city. The building is not open to the public. 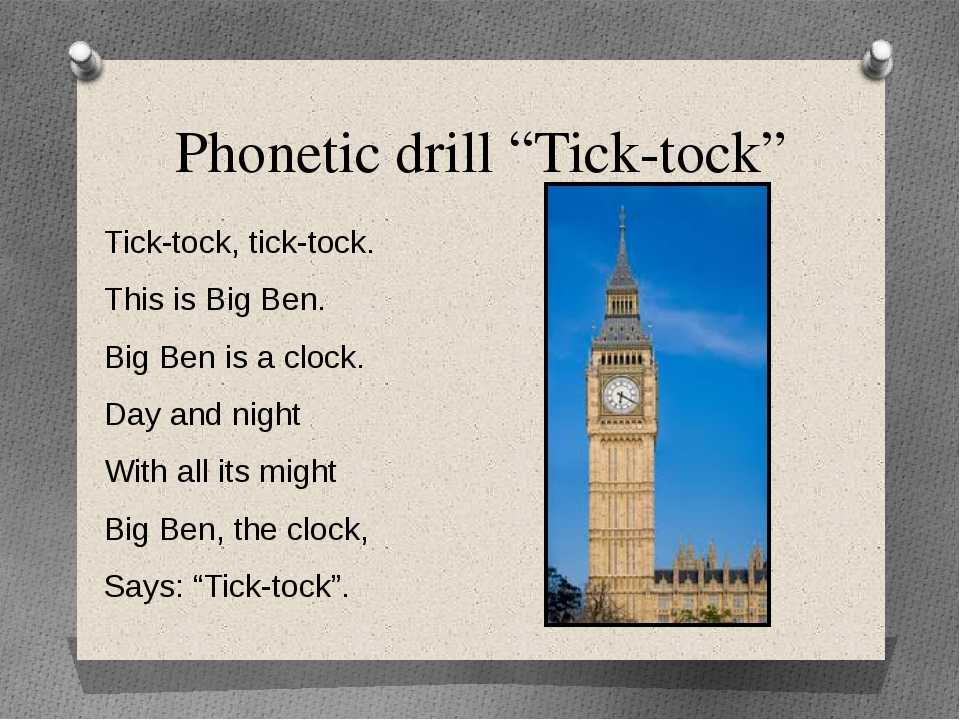 Its unique and efficient design has won the Gherkin many awards.

The Cathedral is one of Europe’s largest cathedrals and it is second in size only to St. Peter’s in Rome. The famous dome reaches a height of 111 meter (366 ft) and weights about 66,000 tons. On top of the dome is a large lantern with a weight of 850 tons.

560 steps lead visitors along three galleries all the way to the top of the dome. The church was the site of a number of important historic events such as the funeral of Admiral Nelson in 1806 and the funeral of Winston Churchill in 1965. Prince Charles and Lady Diana Spencer married here in 1981.

Big Ben is one of the most popular places of interest in London and symbols of England.

Every year many people visit the capital of Great Britain to see it and take some photos with it in the background. It is thought that Big Ben is a high tower with a very big clock, but that’s not really true.

In fact, this tower is called Saint Stephens Tower, but people, even those who live in the UK, are used to calling it «Big Ben.» Actually, Big Ben is the huge bell inside the building. Its weight is about thirteen tons and it rings every hour daily: once at one o’clock, twice at two o’clock and so on. However, people who live near the tower can hear at New Year’s Night how the bell strikes thirteen. It’s considered to be the biggest bell ever made in the country. The bell was firstly used in 1859 and was cracked soon because of the heavy hammer, which struck too strong. After this situation the hammer was changed, but that crack is still there.

There are many hypotheses for the origin of the name “Big Ben”. The most popular one suggests that the bell was named after Sir Benjamin Hall, who was responsible for the installation. 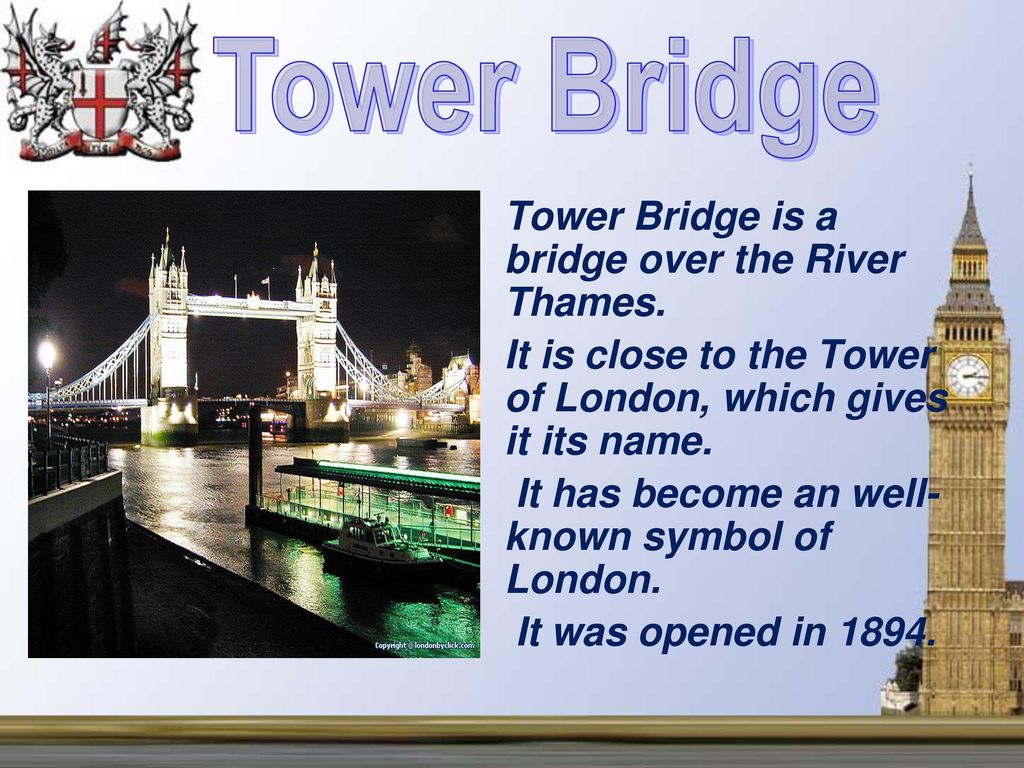 Some of people say he was really tall and that’s why this bell is called big, but the majority believe it is called Big because of its size.

Big Ben is one of the best-known landmarks in Europe. Nowadays the word Big Ben connects the bell, the clock and the tower at the same time. The tower is closed to the general public, but people with a «special interest» might offer an excursion for additional payment. 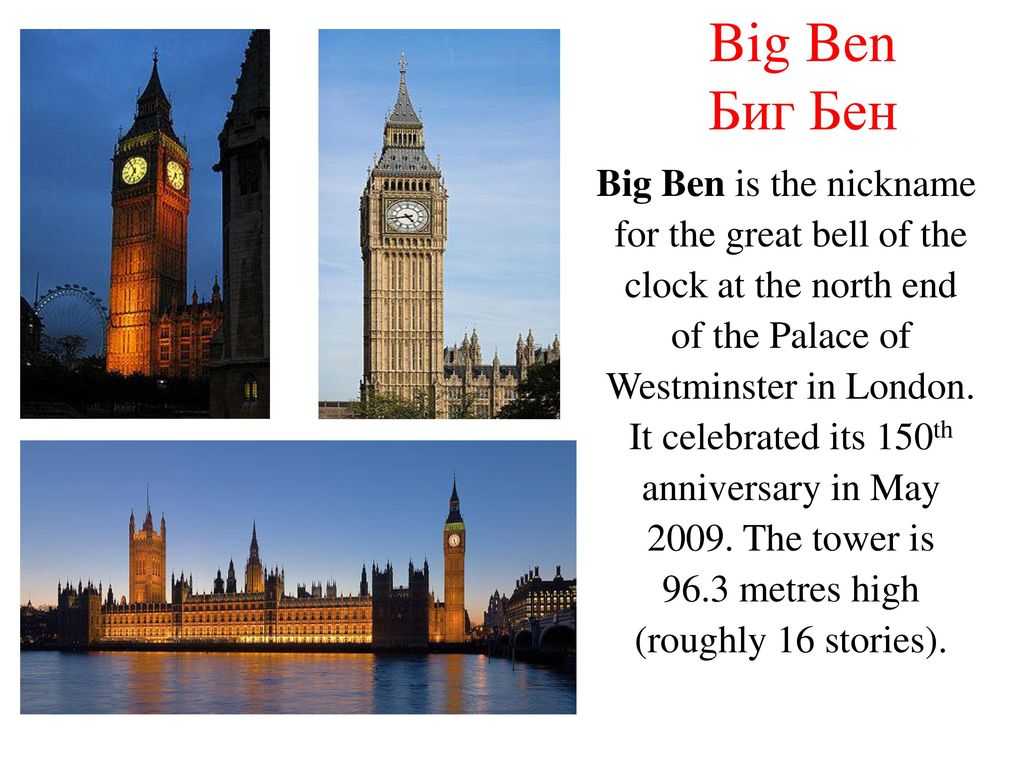 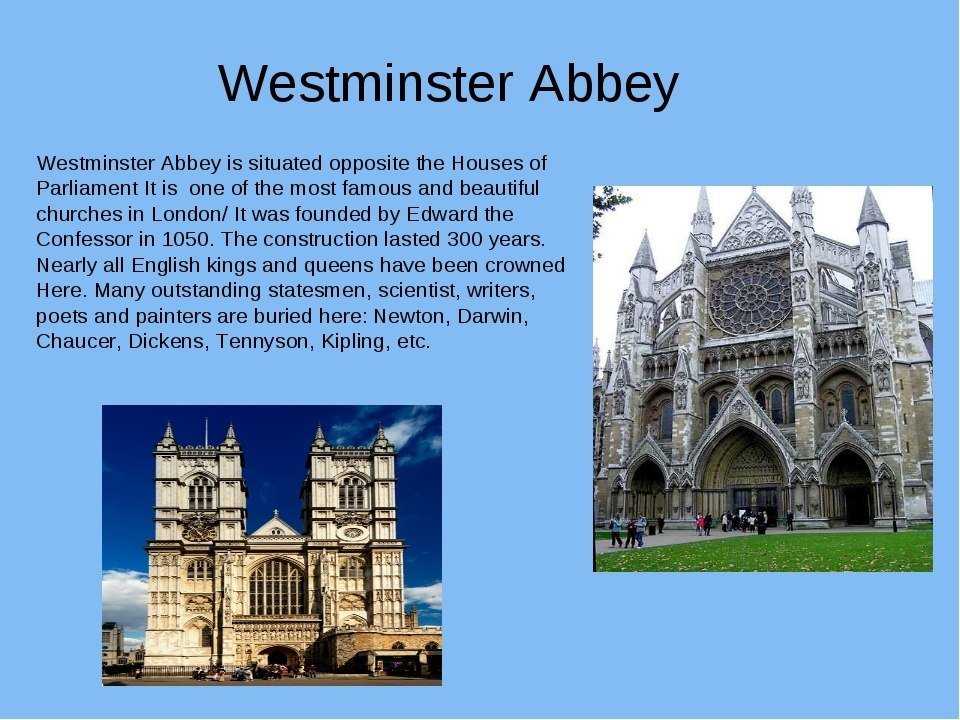 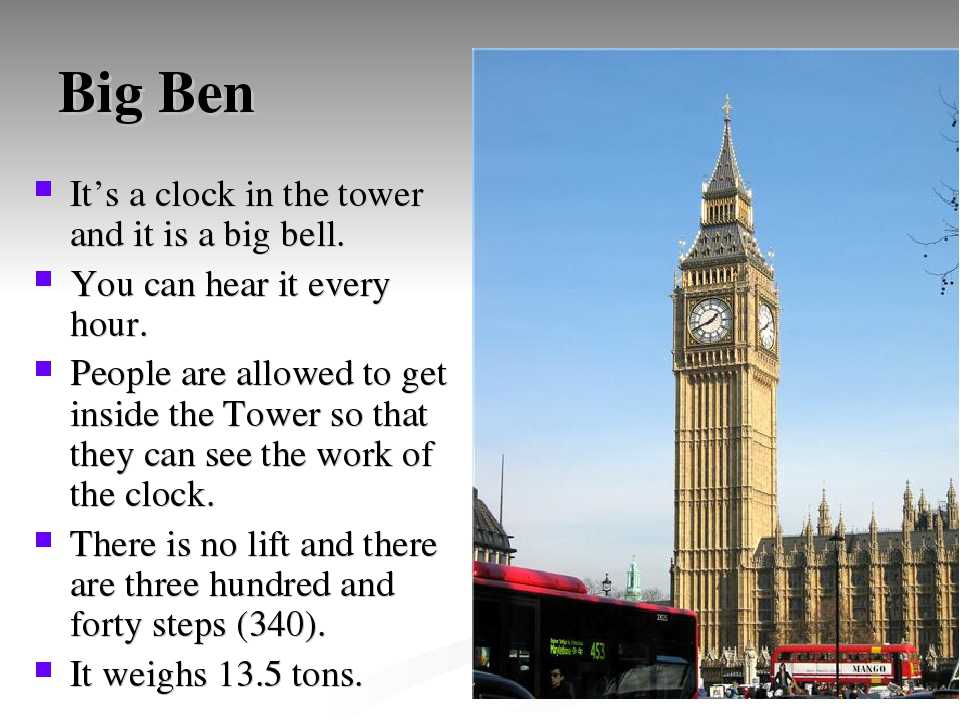 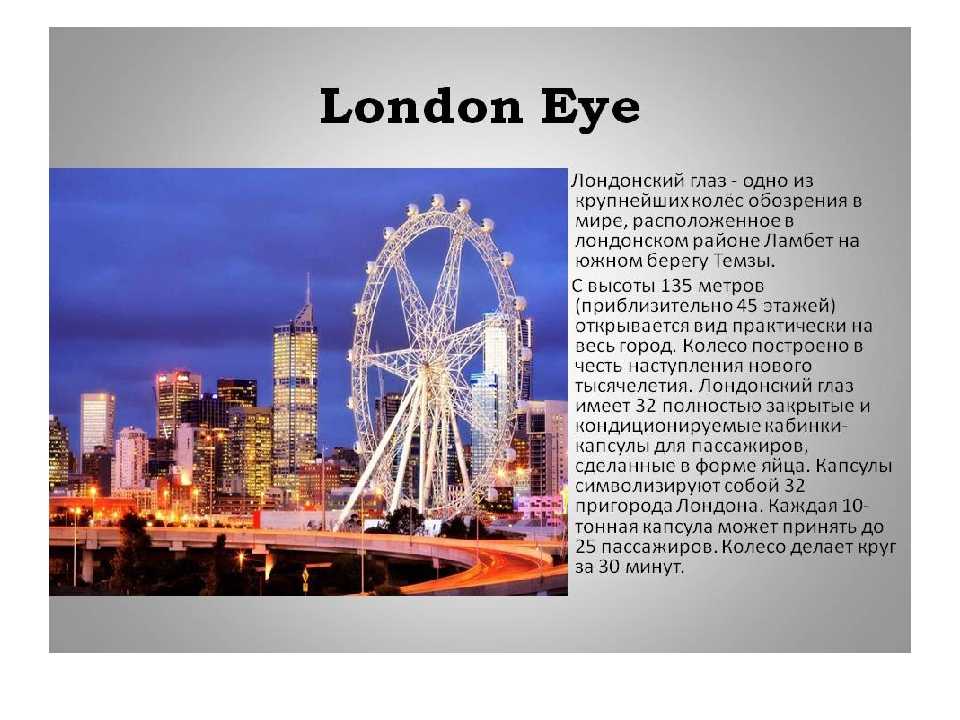 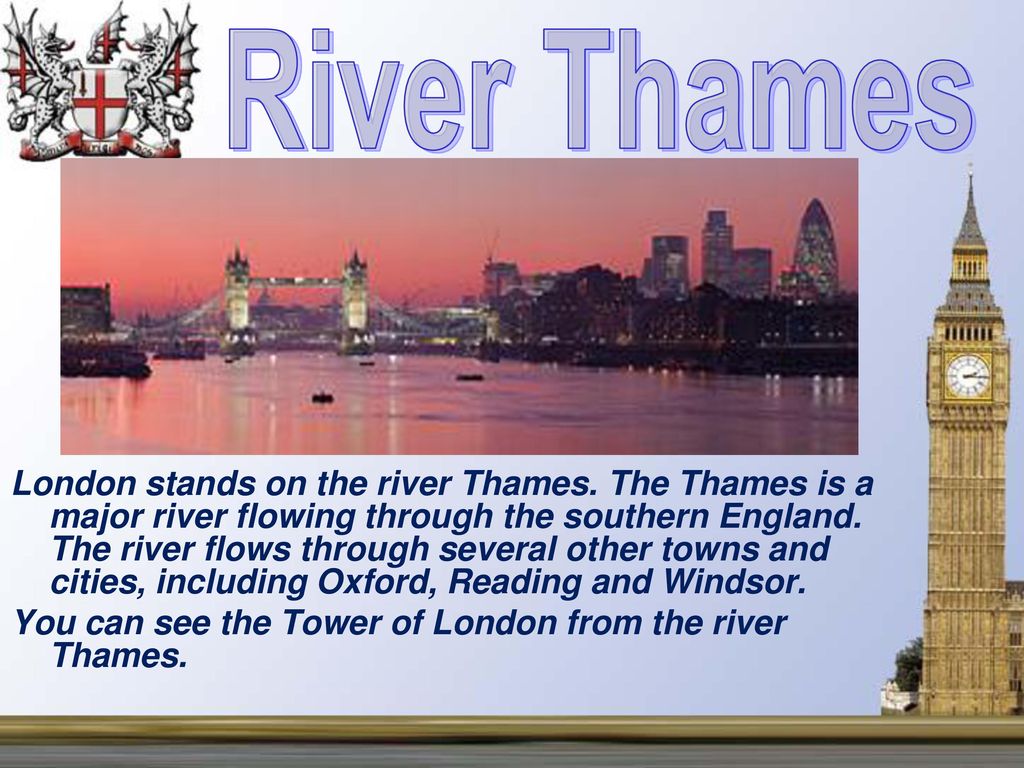 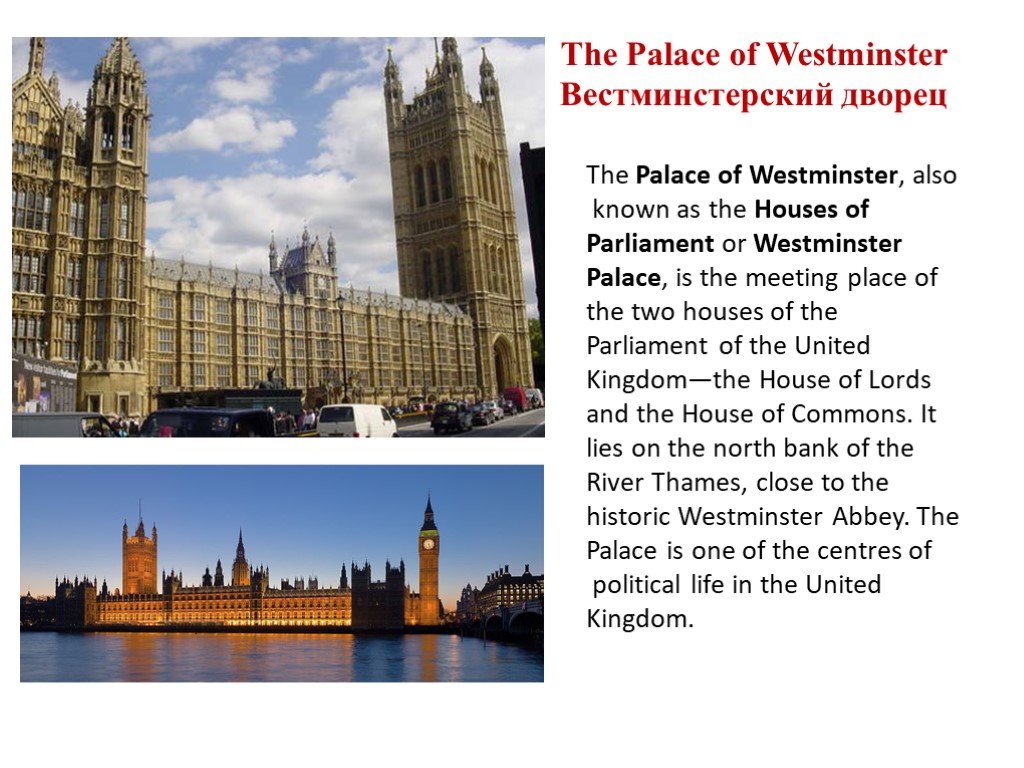 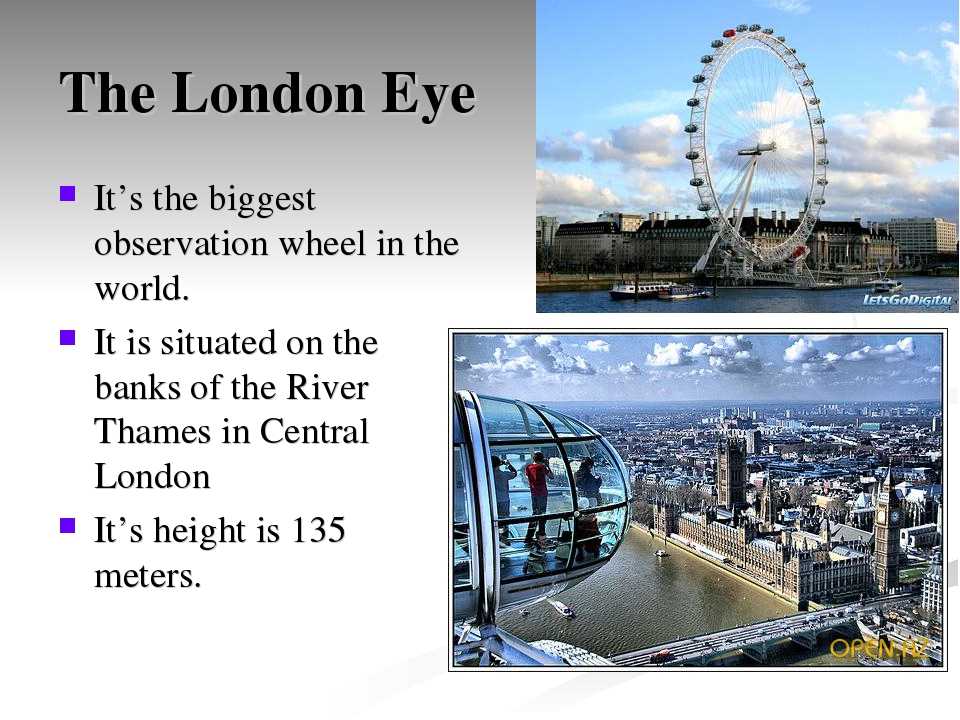 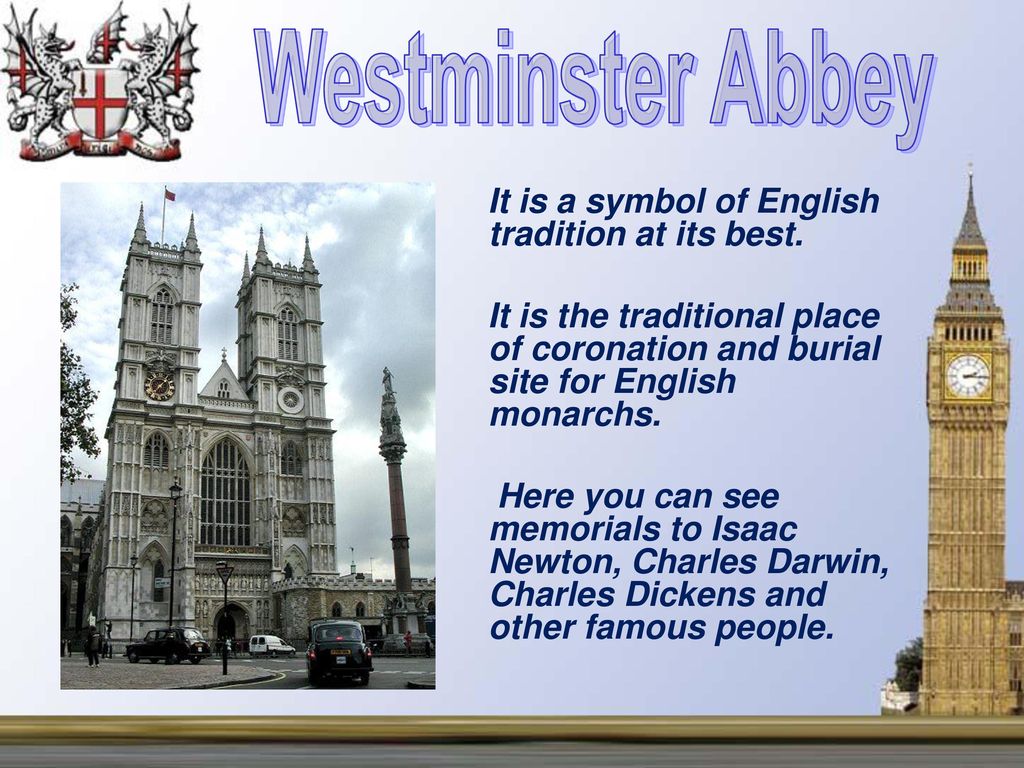